Two years ago, I answered the question, “Are we the last generation of tabletop RPG gamers?” with a solid No – at least not unless future generations become Cybermen and lose the great power of imagination. Granted, it may seem challenging to pitch pen-and-paper RPGs to kids in an age of easy-to-use video and console games, not to mention iPad and Kindles. However, if there’s one thing I’ve confirmed after five years of parenting is that kids REALLY want to stretch their imaginations. (I’ve also confirmed that they think farting is hysterical and mushrooms taste yucky, but I digress.)

My daughter Jordana (now 6) and I have pulled out my D&D minis, maps, and Castle Ravenloft tiles many times during the past three years, often at her request. Over time, our pseudo-D&D playsessions have evolved from lining up the minis for a dance contest to skirmishes with giant spiders to – last year – creating an entire town on GameMastery maps and Dungeon Tiles. "This is the house, this is the diner, and THIS is the hot lava area." She chose specific minis to represent the town’s mayor, innkeeper, rabbi, fighting instructor, and other residents. It was pretty damn cool to watch, both as a gamer and as her dad.

Right around that time, the always-awesome Geek’s Dream Girl site posted “D&D The Next Generation – GGG Gives Tips for Gaming with Kids.” The blog post is worth reading. In a nutshell, the advice is to keep the DM strokes broad, use humor often, and keep in mind that many kid gamers – just like adult ones – have specific gaming preferences that you need to respect. This post, combined with my own experiences, convinced me that the time was right to run Jordana through an actual game.

Gaming with My Kid #1: rpgKids – the saga of a girl, her brother, and their steel snake
The ideal starting place was the rpgKids game by Enrique Bertran, a.k.a. “NewbieDM.”  It’s a clever, rules-light, kid-friendly fantasy RPG. The rules are simple, with four classes that correlate to the classic D&D foursome, a few basic skills, and a grid for combat, which is resolved via contested rolls using just several dice. Damage is also handled simply:  strike a foe once = injured; hit ‘em a second time = down, though the Big Bad might require 3 hits to defeat.

Jordana assembled the party from her town: the sorceress Ayla (wizard), her swashbuckling brother Zeph (archer), and their "pet" steel serpent, Kobri (fighter). Jordana determined that Kobri wears a magical collar that allows him to speak. Together, the siblings and the snake entered “The Lair of the Frog Wizard,” the introductory adventure in the rpgKids download. Can they stop the evil wizard who is turning townspeople into frogs? Do we know why he’s doing this? Naaaah! Doesn’t matter.

The session went extremely well! Jordana loved rolling the dice and – just like a grown-up gamer – got frustrated when her attacks missed, anxious when one of her PCs got hit, and super-excited when she successfully killed a monster. She even quickly grasped the concept of terrain, occasionally placing a PC behind a tree or rock for cover. The only time she seemed unsure of the whole thing was when several ghosts appeared. She was a bit scared of them at first, but once combat began, gamer’s adrenaline took over. :-)

As a DM, I had to be ready to make on-the-fly changes to accommodate the plot, the pace, and my player (e.g., changing the size of an encounter), just as I would if I were running a game for adults. If you have a kid aged 4 or older, rpgKids is a great way to introduce the excitement and fun of RPGs.  It’s available for a ridiculously low $2.99 at DriveThruRPG.

Gaming with My Kid #2: Marvel Heroic RPG – Assault on Avengers Mansion!
I’ve gotten really into Margaret Weis Productions’ Marvel Heroic Roleplaying over the past few months. Next week's post will have a lot more to say about it; for now, suffice it to say that, if run properly, the Marvel Heroic RPG does the best job I’ve seen of replicating the flow of battle, the soap-opera subplots, and the fun of classic Marvel comics.

After digesting the rules and listening to a few podcasts (mostly The Walking Eye’s actual-play sessions and Damage Control), I finally ran a session for my group earlier this month. Jordana, upon hearing of this the next day, said, “I want to play the Marvel game, too!” (Being my daughter, she is of course well acquainted with Marvel superheroes.) “Sure!” I said. Granted, I needed to do a little revising first. While the Marvel Heroic RPG is fairly easy to play once you grasp the key concepts of dice pools and Distinctions, it’s a bit much for a typical 6-year-old who is just looking for an hour or so of fun.

So here’s how I tweaked the rules for a kid-friendly, Marvel RPG-Lite session:

Jordana chose as her heroes Iron Man, the Black Widow, and the Scarlet Witch. She also gave the Scarlet Witch an animal companion, Owl the Owl. (Holy Familiar, Batman!) Naturally, Owl the Owl needed his own datafile and powers, hence we agreed on See-Through Vision, Hearing, Flight, and a Gem of Protection. (See the photo. It's fairly easy to tell which of us wrote what!)

As our story begins, the three heroes (and their owl) are content to relax in Avengers Mansion, and the Black Widow is on monitor duty. Suddenly, there’s a pounding on the wall. It’s getting louder and LOUDER... The Black Widow quickly alerts the other heroes. Then - SMASH! The wall crumbles, and two massive robots stride forward! Clearly, determines Jordana, they’re after the Infinity Gems hidden in the mansion! (Thank you, Super Hero Squad Show.)

Black Widow strikes first, successfully damaging one of the robots. Jordana picks Owl the Owl to go next, saying, “She’s going to use her See-Through Vision to look into the robots and tell Iron Man where the weak spots are.”

I think, “Holy crap, she just created an Asset.” I hadn’t even considered using the game’s Assets or Resources for this version, but hey, there ya go!

Jordana rolls for the Owl and – bing! – Asset created! Shellhead’s resulting attack is a big success, and his repulsors finish off the first robot and damage the second. The Scarlet Witch is unable to destroy that last attacker, though, which gives the robot enough time to locate and rip open the vault containing the Infinity Gems! It collects them, but Iron Man blasts it before it can leave. All done, right? Unfortunately, at that moment, the robots’ master steps through the gaping hole in the wall.... Ultron. (For Ultron, the core dice pool consisted of 5 dice, not 3, and two of those were d12s. Hey, it’s friggin’ Ultron!) 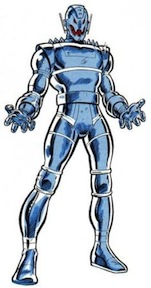 Jordana isn’t thrilled to see him! In typical 6-year-old fashion, she wants to have her three heroes just smash Ultron and be done with it, 1-2-3, but I remind her that Ultron is TOUGH. The Black Widow again attacks first, ineffectually this time, and Ultron promptly throws her through the broken wall, stressing her out (Marvel RPG-speak for K.O.'d). Iron Man lasts a little longer, but he too joins Natasha in the dumpster behind Avengers Mansion. It’s down to just the Scarlet Witch... and Owl the Owl.

Jordana announces that Owl also has a “shriek” power. “OK,” I say. Why not? After all, it IS a super-owl.  She adds Shriek to Owl’s datafile and rolls. Hey, not bad... a total of 16 on the Shriek attack. Now for Ultron’s reaction roll to counter it, which shouldn’t be a problem as he’s rolling 5 dice, including those two d12s, right?

The result of Ultron’s reaction roll: 2, 4 ... and three 1’s. Wow. Owl the Owl’s cosmic hoot cuts through Ultron’s systems like adamantium claws through butter! Normally, that would be enough to end the battle, but Jordana is having too good of a time! We continue, with the once-mighty Ultron staggering through the mansion, trying to repair his body and now spotting the fallen Infinity Gems in the wreckage of his robot minion.

The Scarlet Witch will have none of that! She casts a probability hex, opening up a mini-dimensional void next to Ultron. It sucks the metallic menace into it, along with (determined randomly) one of the Infinity Gems! Ultron is gone from this reality. But where? And will he come back, more powerful than ever? Those answers must wait until our next issue, True Believers!

As you might guess, Jordana and I had a great time doing this. So don’t let anyone try to convince you that the age of tabletop gaming is dead. As long as we continue to help kids find ways to wield their exhilarating, boundless, trope-free imaginations, there will be room for games that allow kids to shape worlds.