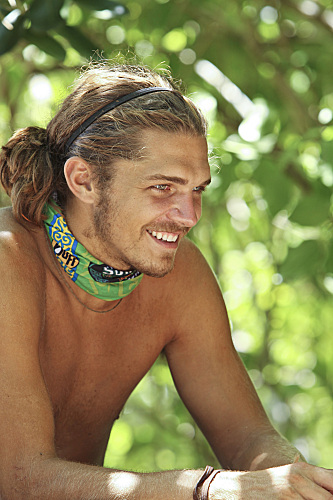 After a so-so first half, the current season of Survivor ("Survivor: Caramoan") seemed like nothing to eat a writhing grubworm over. The inexplicable laziness of Shamar was annoying, and the meltdown of Brandon Hantz - while Train-Wreck TV - was so uncomfortable to watch that you couldn't help but question the producers' motives for bringing him back and your own motives for watching. Could we PLEASE get some actual gameplay?

Then came the Merge, and with it perhaps the best three-episode run in 13 years, certainly since the stretch of "Heroes vs. Villains" when Russell convinced Tyson to vote himself off. Thank you, Survivor Gods.

It started innocently enough when returning player Malcolm (who combines the physical skill of Ozzie, the savvy mind of Yul, and the life approach of a D&D warlock) confers with ally and delicious quote machine Corinne. They decide to betray their Favorites teammates and forge a new alliance with the remaining Fans. It should have worked. The Phillip-"led" Favorites had no inkling... until Corinne tried to bring super-crier Dawn into the fold.

In a treat to Survivor fans, Dawn tells us that she remembers what happened the LAST time she heard about a betrayal and did nothing: Cochran's epic flip (which I still support). This time, though, Dawn rises! And Corinne, who gleefully said that she had never been part of a blindside, gets her wish, Monkey's Paw-style. Bonus: Lovable nerd Cochran beats Malcolm in a thrilling photo finish of a classic Immunity Challenge - the eating of the gross local cuisine. Mmm, chicken embryos. Om nom.

It continued the following week with Malcolm's alliance definitely on the outs, Dawn & Cochran engaging in great strategizing, another terrific Immunity Challenge (combining endurance and willpower), and Andrea getting bizarrely paranoid. But hey, as that episode showed, sometimes they really ARE out to get you! The best part of that hour came at the end, when Malcolm - convinced (by Phillip?!?) that his fellow Favorites are out to get him - uses a Jedi mind-trick to persuade pal and other endangered player Reynold to surrender his hidden Immunity Idol to Malcolm! Kicker: Malcolm already HAD a hidden Immunity Idol that nobody else knew about! Brilliant!

(Another reason to like Malcolm: He doesn't succumb to the insane temptation to blab to everyone, "Look at me! I got the secret Immunity Idol!" As Gandalf told Frodo, "Keep it secret. Keep it safe.")

As it turned out, Malcolm didn't need it, but the end result is that Malcolm's hidden idol remained exactly that - hidden - and now everyone on the island was convinced that Malcolm couldn't possibly have an idol since he had to ask for Reynold's. Fabulous.

It perfectly sets the stage for this past week's episode. Malcolm, Reynold, and low-wattage Eddie know their backs will be up against the wall every vote until either they're gone or they find some cracks in Phillip's anti-stealth Stealth-R-Us alliance, which is already planning to split the next vote between Malcolm and Reynold. (To their credit, nobody aside from Phillip regards Phillip as the leader; they're content to let him run his mouth and be disliked by all potential Jury members.)

Let's jump right to the Immunity Challenge: a grueling water challenge requiring lots of upper body strength and the ability to hold your breath well. Phillip, shockingly, announces that he is NOT going to compete for Immunity! He tells Jeff that a childhood incident left him very afraid of drowning, so he's not going to do this.

OK, I can relate. I, too, have a deep phobia about drowning. A major accomplishment for me years ago was when I first tried (and loved) snorkeling. I understand where Phillip is coming from. BUT THIS IS SURVIVOR. If I were ever to be a contestant, I damn well would compete in every single challenge, even those where I knew I might come in last. Fuck the fear. Else why go on Survivor at all? So for Phillip to pass on this was a) incredibly dumb, b) evidence that - self-deluded as he was - he clearly felt safe, or c) both. Ultimately, Reynold wins the challenge, so the majority alliance figures no big deal, we'll split the vote between Malcolm and Eddie instead!

Malcolm doesn't rest. He's gambling that there's another Immunity Idol hidden somewhere on the beach, so the Three Muy Macho Amigos start searching. The possibility that "Hey, maybe we should find the idol before those three guys" apparently occurs to no one on the Stealthy alliance other than Dawn and Brenda; they start looking, too. Right before the ladies' stunned, shocked eyes, though, Malcolm finds the other idol! The look on Dawn's face said it all: Crap. Still, they figure they'll split the vote as planned, just in case Malcolm gives the idol to Not-So-Fast Eddie.

At Tribal Council, before the voting even starts, Malcolm displays his newly found idol... and then reveals his original one, which he gives to Eddie! All three guys are potentially safe. Wow. Sure, Malcolm could've waited until after the votes were cast to make his move. But what places his action in the top tier of Survivor moves is what comes next. He announces that all three men are voting for Phillip. This kicks off something unprecedented in Survivor: The tribe members begin openly whispering and changing their votes on the fly. Right there! Cochran smiles the smile of a fanboy, even though his side is on the receiving end of this shocker, and I'm smiling right with him. It's stupendous. Beautiful. Phillip's name is whispered, and so is Andrea's. Who would be voted off? Would Malcolm and Eddie actually play their idols? Will I ever recover from the fact that it was Clueless Erik who actually pointed out that not playing the idols was an option?

In the end, everyone votes as originally stated, which means the majority alliance's votes are for naught and Stupor Secret Agent Phillip - the man who refused to compete earlier that day - is eliminated with just three votes.

Karma, you are a magnificent bastard.

And with Phillip goes Stealth-R-Us (huzzah!), which also means that alliances may be up for grabs from here on out. Fabulous. What did you think, fellow Survivor buffs?